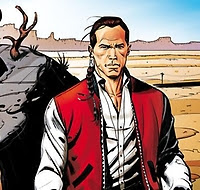 Arizona, July 1972. Thorn Kitcheyan is a Navajo / Tohono O'odham Naval originator who is nicknamed Saguaro by his people because of his little remorse. Having fought during the Vietnam War and being discharged from the army following a dangerous mission to Laos, where he had been seriously injured, he returned to Window Rock, the capital of the Navajo State, and bought some arid land from an old native named Tocho, happy to shed it, free of electricity and settled there.

The land, however, has the advantage of being adjacent to the State Road, and located right on the border between Arizona and New Mexico; For this reason, Noah Folsom, a wealthy and powerful criminal, whose lands border with Tocho, would like to find it and use it as a way of passing on his drug traffics. Since Tocho never wanted to give up on his offerings, Folsom (who also diverted the course of a stream crossing the ground condemning him to drought) with the help of a corrupt cop he kidnaps the old man and has him killed by one of his henchmen, Tomas Vidal, to take revenge on what he considers an unforgivable affront. Saguaro will find himself accidentally involved in the long sequel of blood that will result, in which the corrupt policeman and Vidal (Folsom, however, will be able to get away but with some luck he is arrested) will die, and from which he will be wounded but safe. Especially with no judicial traps thanks to the aid he indirectly lent to the police in arresting the criminals and the failure of a major drug deal from some Mexican traffickers.

Following these and other dramatic events, Saguaro is chosen by the FBI to form a special unit of federal agents commissioned to mediate between white people and natives and investigate cases where tribal police cannot act. In addition to white offenders, Saguaro will also face his own brothers who will try, sometimes with violence, to assert their rights and become independent, convinced that, after all, the nation that served during the war is, in the good And evil, his land. During his stay at Window Rock, Thorn will be fighting an old enemy, "Cobra Ray" Brest, a violent superior during the Vietnam War. Subsequently, the Wounded Knee revolt begins and, when it is over, begins a new uprising with Nastas Begay, the blood brother of Saguaro, head of the rebels. Saguaro is forced to help Nastas in a time of need and leave the federals to face the ruthless fighter alone. 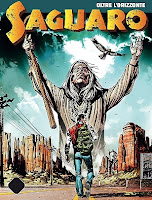 Saguaro was a comic book series designed by Bruno Enna and edited by Sergio Bonelli Editore, of which 35 issues were published from June 2012 to April 2015.

Bruno Enna conceived the series after reading an article about Shadow Wolves, a group of Native Federal agents who still operate on the border between Arizona and Mexico. Initially he thought of a graphic novel, presented the idea to Sergio Bonelli Editore, thinking he could develop it into a mini-series. It was Sergio Bonelli who decided to create an entire series without a definite end. He also gave some advice to the author, including reading Tony Hillerman's novels and drawing inspiration from the face of a young Tom Berenger for the graphic creation of the protagonist. At that time Enna's choice of actor to take as a model oscillated between Adam Beach, Val Kilmer and Dwayne Johnson.

Sergio Bonelli Editore formalized the existence of the series in March of 2012 by publishing on its site two images depicting Saguaro. It was premiered at Torino Comics 2012 on April 14 and 15 and in Naples Comicon on April 29. The cover of the first album was presented at the end of April. 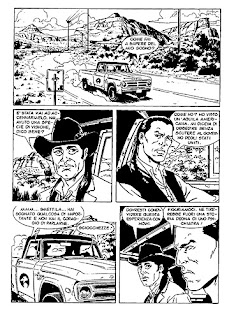