The Magic of Spaghetti Westerns 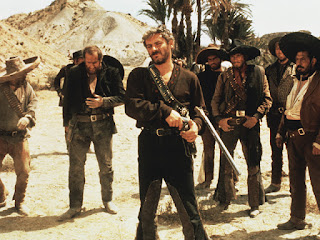 Expres
By David Lopez
08/22/2015
Earlier in the westerns, the difference between good and evil was defined, by the color of their hats. Good were men of honor, usually law enforcement an wore a white hat; while the bad, bank robbers or livestock thieves, were dressed in black including their hat, and how they tried to aspire the love of women who were kidnapped and tied to the train tracks instead of going to one of the thousands of cat houses milling about the Old West, but they could not, because there was no sex in the gringo westerns. Finally, there are the Indians, who were evil because of just being Indians.

Then came along a few Italians and a couple of Spaniards to create a revolution in the way of showing the old west in the cinema, where good and evil are mingled and confused, especially by self-interest, easy money and sex. The law hunted fugitives like animals for a few dollars; the good are not so bad and are sometimes even good.

A subgenre became known as the Spaghetti Western. The adjective "spaghetti" comes from the fact that all those cowboy movies, even though it’s the "story of the old American West" were filmed in Italy (filmed in Spain known as Western Chorizo).

With classic and emblematic films as the dollar trilogy Leone’s: A Fistful of Dollars (1964), For a Few Dollars More (1965) and The Good, the Bad and the Ugly (1966), has left a deep mark on popular culture.

There were other directors such as Enzo Barboni, Sergio Corbucci, Joaquin and Rafael Romero Marchent; actors Charles Bronson, Henry Fonda, Terence Hill, Bud Spencer and Anthony Steffen and composers, Luis Bacalou, Fidenco and Armando Trovaioli, who made films among which are: Oro sangriento (1970); Ocaso de un pistolero (1965); A Pistol for Ringo (1965); Cazador de recompensas (1966) and some of comedies such as They Call Me Trinity (1971), Trinity is STILL My Name(1972), None of the Three Were Called Trinity (1972) and My Name Is Nobody (1973), though none could overcome the popularity of the dollar trilogy.
Posted by Tom B. at 5:47 AM