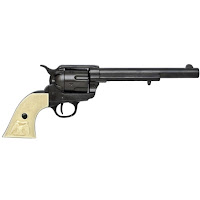 In 1987, Sergio Leone contacted his old collaborators Sergio Donati and Fulvio Morsella, pitching an idea for a TV miniseries about a Colt revolver that passed from owner to owner throughout the Old West, similar to Anthony Mann's film “Winchester '73” (1950). Donati indicated that Leone was interested in a more revisionist take on the genre than his earlier works, wanting to show the Old West "like it really was." Leone abandoned this project in favor of “A Place Only Mary Knows”, though Donati wrote a treatment and the project remained in gestation for years after Leone's death. In 1994 Leone’s son Andrea again revived the ide but once again it did not come to fruition because he could not raise the production funds.
Posted by Tom B. at 5:52 AM