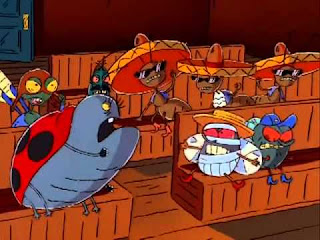 Santo Bugito is set in a titular border town between Texas and Mexico, populated by various anthropomorphic insects. Carmen De La Antchez is the show's protagonist, an ant who runs a restaurant in the town with her husband, Paco. The town is populated by other insects, including two brash American flies, Clem and Burt, a hyperactive flea named Lencho, a cynical artist termite named Eaton Woode, a butterfly named Rosa and her boyfriend Miguel who is still in his cocoon, Amelia, an enthusiastic damselfly, Ralph, a large friendly lady bug with a rather deep voice and a praying mantis professor who occasionally interrupts the show to give dull educational lectures, but is usually pushed off-screen by another character.

Santo Bugito was a 1995 animated cartoon series co-produced by France, Korea and the U.S.A. and developed by Klasky-Csupo for CBS, created by Arlene Klasky. It ran for thirteen episodes and revolved around the goings on in a fictional community of insects. Notable achievements of this series included a revival of the insect-community genre (little of which had been seen since Mr. Bug Goes to Town) well before Antz or A Bug's Life, and voice cameos from well-known performers such as James Belushi. The regular cast voices included Hollywood veterans such as Henry Gibson, George Kennedy, Cheech Marin, and Joan Van Ark. The show has also aired on ITV, Nickelodeon and Pop in the United Kingdom and on ABC in Australia.