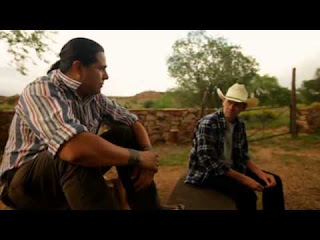 Having previously done a BBC4 documentary on the westerns, Rich Hall this time looks at the misrepresentation of Native Americans down through the years, with particular focus on the role of Hollywood in the portrayal. On the face of it there isn't much to say since it is common knowledge that as a people they were slaughtered and abused by those colonizing America and then later in the media they were generally categorized as one-dimensional baddies played by tanned-up white actors who mostly fell off horses when the white hero shot them. Sure there have been some revisionist westerns in the last few decades but generally these have been more of a pill for the guilt of the mass audience rather than anything else. So with this general knowledge, it is a fair question to ask what Hall can bring to the table. The tone is jocular but not to the point where it trivializes the subject, just the point where it makes it fresh and entertaining.