We continue our search for locations for “The Gatling Gun”. The scene switches from Tarpas and Martha Simpson arguing in the saloon to the Grant ranch where the two brothers are seen arguing over the presence of Chris Tanner and the whereabouts of their brother Jeremiah. When Tanner rides in Ted Grant lassoes Chris and drags him around the ranch until the rope snags on a tree and pulls Ted’s horse over. Tanner manages to get loose from the rope and smacks Ted around telling him his brother is safe. He then walks over the ranch house and the scene ends. 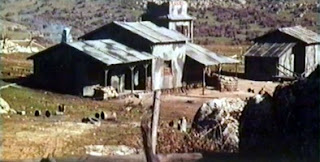