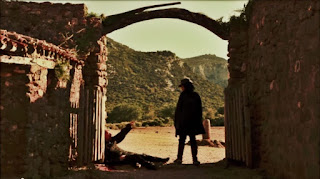 A cold and ruthless bounty hunter is looking for two gunmen, the tracks lead him in a borderland where the problems will be the first to arrive, the contents of the black bag that brings with it will be discovered by the wrong people who will do anything to it ...

A four part Web series: Created and directed by Mauro Aragoni is a Spaghetti Western crude and ruthless. The director pays homage and takes the old school of the great Sergio Leone while taking into line his personal style dark and horror. Just out immediately he had an excellent response from the public and critics, as demonstrated by numerous articles on the Web and print magazines.

He received numerous awards in Italy and abroad,

In addition, the film received great compliments from some important members of the Spaghetti Western genre, which Giancarlo Santi (historical assistant director Sergio Leone in the Dollar Trilogy, Once Upon A Time In The West etc.) and Ennio Morricone regarding the soundtrack signed by the young Antonio Manca.