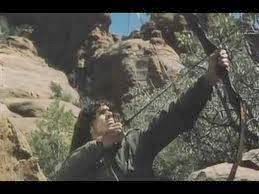 Luis Martinez, called " Thunder ", an Indian enrolled in the police force, in a small town in Arizona, among his colleagues is Deputy Sheriff Rusty. The two have had disagreements in the past, and old grudges resurface. Rusty is at the center of a drug trafficking racket and, scared by the presence of "Thunder",  is assigned to patrol the area where these trades take place. Rusty accuses Thunder, with false evidence, of the murders of Max, a drug trafficker in business with Rusty, who was killed by them in his car. "Thunder", despite the involvement of the lawyer Tomas Ruder, is sentenced to five years' hard labor, to be served in a field where he is subjected to continuous abuse. After having spent eleven days locked in a metal box, miraculously manages to escape. He takes refuge in the mountains, where he is joined by his wife, who is expecting their first child, and who has contacted the lawyer to reopen the trial where he was convicted unjustly. But Rusty is on his trail, and using a helicopter, strikes the car of "Thunder". In the incident the woman loses her baby and "Thunder" swears revenge. Starting a war , like the old Indians, he puts war paint on his face and carries a hatchet . Having knocked out all surveillance, "Thunder" arrives at Rusty’s cell where he is waiting to be tried for his criminal activities, but, coming face to face with his rival, does not dare to kill him. Thunder reaches the border with a car, thanks to the complicity of the sheriff, "Thunder" crosses the border and escapes into Mexico.