The Myth of the Cowboy 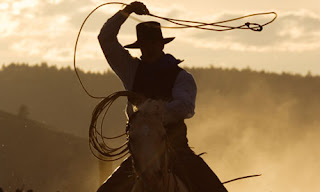 In Britain, at least, the word "cowboy" today has a secondary meaning, which is much more familiar than the primary meaning of a fellow in the Marlboro ads: a fellow who comes in from nowhere offering a service, such as to repair your roof, but who doesn't know what he's doing or doesn't care except about ripping you off: a "cowboy plumber" or a "cowboy bricklayer". I leave you to speculate (a) how this secondary meaning derives from the Shane or John Wayne stereotype and (b) how much it reflects the reality of the Reaganite wearers of dude Stetsons in the sunbelt. I don't know when the term first appears in British usage, but certainly it was not before the mid-1960s. In this version, what a man's got to do is to fleece us and disappear into the sunset.

There is, in fact, a European backlash against the John Wayne image of the west, and that is the revived genre of the western movie. Whatever the spaghetti westerns mean, they certainly were deeply critical of the US western myth, and in being so, paradoxically, they showed how much demand there still was among adults in both Europe and the US for the old gunslingers. The western was revived via Sergio Leone, or for that matter via Kurosawa – that is, via non-American intellectuals steeped in the lore and the films of the west, but sceptical of the American invented tradition.

In the second place, foreigners simply do not recognise the associations of the western myth for the American right or indeed for ordinary Americans. Everyone wears jeans, but without that spontaneous, if faint urge that so many young Americans feel, to slouch against an imagined hitching post, narrowing their eyes against the sun. Even their aspiring rich don't ever feel tempted to wear Texan-type hats. They can watch John Schlesinger's Midnight Cowboy without a sense of desecration. In short, only Americans live in Marlboro country. Gary Cooper was never a joke, but JR and the other platinum-plated inhabitants of the great dude ranch in Dallas are. In this sense the west is no longer an international tradition.

What was so special about cowboys? First, clearly, that they occurred in a country that was universally visible and central to the 19th-century world, of which it constituted, as it were, the utopian dimension: the living dream. Anything that happened in America seemed bigger, more extreme, more dramatic and unlimited, even when it wasn't – and of course often it was, though not in the case of the cowboys. Second, because the purely local vogue for western myth was magnified and internationalised by means of the global influence of American popular culture, the most original and creative in the industrial and urban world, and the mass media that carried it and which the US dominated. And let me observe in passing that it made its way in the world not only directly, but also indirectly, via the European intellectuals it attracted to the US, or at a distance.

This would certainly explain why cowboys are better known than vaqueros or gauchos, but not, I think, the full range of the international vibrations they set up, or used to set up. This, I suggest, is due to the in-built anarchism of American capitalism. I mean not only the anarchism of the market, but the ideal of an individual uncontrolled by any constraints of state authority. In many ways the 19th-century US was a stateless society. Compare the myths of the American and the Canadian west: the one is a myth of a Hobbesian state of nature mitigated only by individual and collective self-help: licensed or unlicensed gunmen, posses of vigilantes and occasional cavalry charges. The other is the myth of the imposition of government and public order as symbolised by the uniforms of the Canadian version of the horseman-hero, the Royal Canadian Mounted Police.

Individualist anarchism had two faces. For the rich and powerful it represents the superiority of profit over law and state. Not just because law and the state can be bought, but because even when they can't, they have no moral legitimacy compared to selfishness and profit. For those who have neither wealth nor power, it represents independence, and the little man's right to make himself respected and show what he can do. I don't think it was an accident that the ideal-typical cowboy hero of the classic invented west was a loner, not beholden to anyone; nor, I think, that money was not important for him. As Tom Mix put it: "I ride into a place owning my own horse, saddle and bridle. It isn't my quarrel, but I get into trouble doing the right thing for somebody else. When it's all ironed out, I never get any money reward."

In a way the loner lent himself to imaginary self-identification just because he was a loner. To be Gary Cooper at high noon or Sam Spade, you just have to imagine you are one man, whereas to be Don Corleone or Rico, let alone Hitler, you have to imagine a collective of people who follow and obey you, which is less plausible. I suggest that the cowboy, just because he was a myth of an ultra-individualist society, the only society of the bourgeois era without real pre-bourgeois roots, was an unusually effective vehicle for dreaming – which is all that most of us get in the way of unlimited opportunities. To ride alone is less implausible than to wait until that marshal's baton in your knapsack becomes reality.