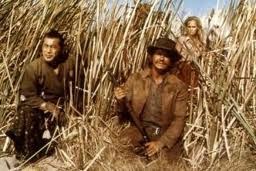 Link Stuart is a ruthless outlaw, and co-leader along with Gauche of a gang of bandits. Link and Gauche lead their gang on a successful train robbery, and discover that one of its cars carries a Japanese ambassador, who is bringing a ceremonial katana (sword) as a gift for President Ulysses S. Grant. Gauche takes the sword, and kills one of the two samurai guards, while members of his gang attempt to murder Link by throwing dynamite into the train car he occupies, then leaving him for dead.

The surviving Japanese delegation rescues Link, and the ambassador instructs him to assist Kuroda in tracking down Gauche so that he may kill him and recover the sword and his honor. Kuroda is given one week to fulfill this task, or commit seppuku. Link reluctantly agrees, but he realizes that Kuroda will kill Gauche immediately, before he is able to extract the location of the stolen loot. Link repeatedly attempts to elude Kuroda, only to be thwarted by the irrepressible samurai.

While tracking Gauche's gang, the duo encounter several obstacles, and Kuroda reveals that his samurai values are disappearing as his countrymen no longer value the customs of old. Link gains a measure of respect for the strict bushido code Kuroda follows, and eventually comes to an agreement with the samurai that Gauche will not be killed before he reveals the location of the stolen money. The duo abduct Gauche's woman, Cristina , who leads the men to Gauche and his gang.

In the ensuing fight, Kuroda is mortally wounded, and a disarmed Gauche tries appealing to Link's greed. Link decides that the dying samurai's honor is more important to him than learning the location of the stolen money, so he kills Gauche. Just before Kuroda expires, Link promises him that he will return the katana to the Japanese ambassador. He does so, thus preserving Kuroda's honor.