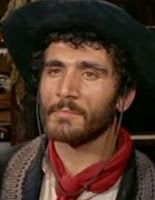 Salvatore Billa was born in Catania, Sicily, Italy on March 31, 1943. He was an Italian actor and stuntman, and was very active during the seventies and eighties. From the early 1960s until the early 2000s, he appeared in more than 100 films, alternating from a mere extra to important supporting roles. Among these were the films “Squadra antifurto” directed by Rosario Trapanese, “I guappi” directed by Don Carluccio Trepalle and “L'uomo delle stele” directed by Giuseppe Tornatore. Billa also worked in television, participating in some TV dramas, with his most famous role as that of the Camorra boss Salvatore Gym in the miniseries “Naso di cane”. Billa appeared in 10 Euro-westerns from “Beyond the Law” (1967) to “Court Martial” (1973). Salvatore died on May 22, 2006 in Rome at the age of 63. Today we remember Salvatore Billa on what would have been his 70th birthday.