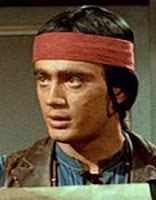 Serbian actor Predrag Ceramilac committed suicide on Monday December 12, 2011 by jumping from the seventh floor of a building in Belgrade Medaković village where he lived, according to Serbian courier. He was 67. The actor was born on February 3, 1944. in Cacak, Serbia and appeared in the films “Sasa” (1962), “Two Nights in One Day” (1963), “The Man from the Oak Trees” (1964), “Days of Temptation” (1965), and “Memento “ (1967). Predrag appeared in one Euro-western "Flaming Frontier" (1965) as Old Surehand's scout. Ceramilac appeared at the 9th Yugoslav Film Festival in Pula in 1962 and received the Golden Arena for his debut film role in “Sasa”, directed by Radenka Ostojic. According to his neighbors Predrag was suffering from lung cancer and was to go to a therapy treatment but he could no longer endure the pain and instead went to the terrace of his apartment and jumped to his death.