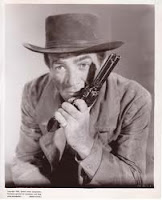 Richard William Stevens was born on December 13, 1916 in Cleveland, Ohio. Stevens originally desired to become a painter before becoming active in local theater work. He then became a radio announcer on an Akron, Ohio station. Moving to Hollywood in 1943 he signed a Warner Brothers contract. Stevens was given a complete makeover by darkening his curly red hair to black and straightened and his freckles were covered. He was first billed as Stephen Richards, but that was changed to Mark Stevens by Darryl Zanuck when he moved over to 20th Century Fox. He became a leading man starring in “Within These Walls” (1945) and “The Dark Corner” (1946) with Lucille Ball, “The Street With No Name” (1948) with Richard Widmark and “The Snake Pit” with Olivia de Havilland. During this era he also appeared in musicals such as “I Wonder Who’s Kissing Her Now?” (1947) and “Oh, You Beautiful Doll” (1949). From 1954-1956 he starred in the TV series “Big Town” replacing the original star Patrick McVey. During the late ‘50s Stevens began working behind the scenes as a producer and screenwriter. In the 1960s he moved to Europe and there appeared in his only Euro-western “Sunscorched” (1965). Living in Spain he returned occasionally to make a few TV appearances on such shows as “Magnum P.I.” and “Murder She Wrote” in the 1980s. Stevens died of cancer in Majores, Spain on September 15, 1994. Today we remember Mark Stevens on what would have been his 95th birthday.