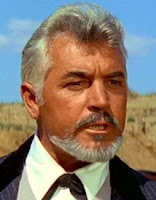 Renato Baldini was born on December 12, 1921 in Rome, Italy. Baldini was a very flexible actor who played many different supporting roles even though often not very large or prominent ones during his long career. After World War II he practiced in many trades, among other things, before becoming an actor. In 1950 he debuted in his first film, getting a part in “Ne mulatto”, directed by Francesco De Robertis, in which he appeared as Angel May. From 1950 to 1968, Baldini appeared in numerous films on various subjects (crime, adventure, historical, mythological, spy, comic, and sentimental), but few had any great artistic value, he usually played character and supporting roles, for which he created a certain efficacy by the stereotyped character of the young brave, strong and loyal assistant of the lead actor. Renato appeared in 15 Euro-westerns starting with “Frontier Hellcat” in 1964 to “The Genius” in 1975. He was easily recognized by his silver-white hair and dark eyebrows. Baldini died on July 5, 1995 in Rome. Today we remember Renato Baldini on what would have been his 90th birthday.