KITOSCH, THE MAN WHO CAME FROM THE NORTH 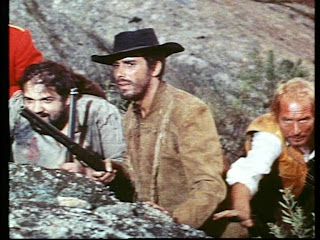 The Canadian military authorities must transfer a load of gold through an area infested with four bands of marauders and Indians all lead by the mysterious McCoy aka "Renegade". To make it safely, the transport is assigned to Major Zachary Becker who, during an ambush, is helped by Kitosch, a brave former Mountie, a rather undisciplined but knowledgeable frontiersman. Kitosch is, sought after by an Indian tribe because of his offensive actions toward them, when Major Becker disappears into the waters of a river, Kitosch takes on his identity and joins a caravan of five coffins, five women dressed in mourning and a company of redcoats. Upon reaching Fort Eagle they find it destroyed but, Kitosch and his fellow travelers camp out there. They learn the load of gold has been hidden in the coffins, soon what’s left of the fort is attacked by all the bands of "Renegade". But Kitosch valiantly defends the gold against the Indian and bandit attacks, and when everything is settled, he is able to identify the strange figure of the Indian missionary as the true "Renegade" and kills him.
YouTube link: http://www.youtube.com/watch?v=23TnKftAiJY
Posted by Tom B. at 6:11 AM