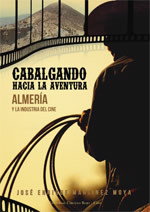 The work of Jose Enrique Martinez Moya, CABALGANDO HACI THE AVENTURA, Circulo Rojo, 2011, is well worth a topic on its own.

Images (black and white) of unpublished archives, such as preparing the filming of “A Fistful of Dollars” at the Cortijo El Sotillo (San Jose) and beautiful views of Poblado Leone, Estacion La Calahorra (Granada) (photos by Michel Commes ) and others.
Moya has revised his first book on Almeria called Pelicula mundo, (1999), ranking the movies by genre, always with accurate information on local figures, including the existence of a corporate official. He explains the probably of a total absence of names and terms of our retired English, employees may have been working against the interests of their corporations, Moya also publishes a membership card of the Union of Provincial Show, 1965 and provides specific daily wages.
The book shows how a poor province in southern Spain, grew into a branch of Hollywood. Its landscape features, with a range that goes from the desert sand, dry gullies, wide boulevards, plains and mountains to the coast ... in no more than 100 km, made it a haven for cinematography.
Moya’s book is a tribute to Hollywood and European filmmakers and complements his other previous work, Almería, a World of Film, which shows that this land could be more than a passing rail stop in the uncertain fate of life, the fact remains it is Earth Cinema.
Moya also publishes photographs of scenes taken in the late 1970s, a lot of drawings (by the author) and provides new information on some sets, like the ghost town that is the entrance to “The Good the Bad and the Ugly”, which was destroyed after filming in order to use the building materials on other sets. We also learn of the existence of certain projects of reconstructed and destroyed sets, such as La Calahorra .... (Nuevo Tucumcari project, failed).
A comprehensive review of films, places, man-made and natural scenery, plus a valuable study of the film industry in Almeria (professional associations, film studios etc ...) and a small mention of the western film locations in Italy.
The book can be ordered from Picasso Librerias Almeria: http://www.librerias-picasso.com/
Perfectly secure online purchase and transport TNT in France. Excellent after sales service.
Those who love the spaghetti western should not miss picking up a copy.
Posted by Tom B. at 6:23 AM