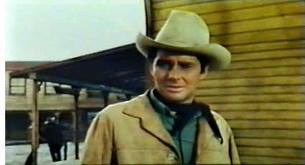 Johnny Ringo a Texas Ranger, was given the job by the State Department to unmask a mysterious organization counterfeiters. The only clue: some 15 years before Victor Mellin, an employee of the Federal Bank, disappeared, taking with him two $10.00 molds. Ringo in disguise arrives in Eagle Pass, a town on the border with Mexico, where it is suspected that the carrying out of the sale of counterfeit money is taking place. A saloon owner, Jackson, toys with Ringo, trying to give him some of the counterfeit notes. The ranger detects this and starts a fight with Jackson's henchmen, arrested by the sheriff, he places Ringo in jail. Ringo shows the sheriff his identification. Meanwhile, Jackson, realizing that the young Ray Scott is tries to convince Annie, the lead singer of the saloon, to escape with him to Mexico. A young Mexcan threatens to publicly tell that he knows about Jackson's organization. Although wounded, he manages to escape from town. A ruthless manhunt for the bandits begins but the fugitive Mexican finds in Ringo an insurmountable obstacle. The ranger cannot let the posse capture the only person who could blame the forger and his accomplices. After ups and downs Ringo manages to expose all the components of the organization and find out that the sheriff is Victor Mellin, the forger.
YouTube link: http://www.youtube.com/watch?v=jyq6R6o9JXc
Posted by Tom B. at 8:09 AM