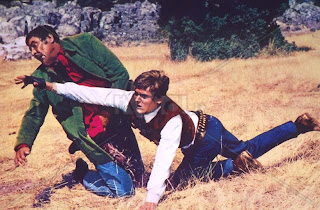 Jess Bryan returns to his hometown, where he had to leave after killing the vicious bandit Gaspar and saving the life of Jack Bradshaw the right hand man of the wealthy Sam Ringold. After being ambushed twice and the violent death of his friend Bob Elliot, Jess asks to be appointed deputy. In the new guise, Jess investigates a series of crimes, all committed by a person owning  a Winchester rifle which is very well known in the country, and seems to point to Bradshaw. The truth, however, is another story, and Jess is able to discover it at the cost of several lives. It turns out the killer is a mysterious serial killer who uses a special rifle as a murder weapon. Jess finally solves the mystery and then leaves his country, together with Sheila, the woman he loves.