Who Are Those Guys - Giancarlo Bastianoni 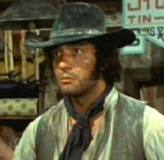 Giancarlo Bastianoni was more an Italian acrobat and stuntman than an actor. Probably born in the late 1930s or early 1940s, he participated in a number of Bud Spencer and Terence Hill films where he usually played a henchman and thug in order to take advantage of his athletic ability in saloon brawls. Giancarlo appeared in 10 Euro-westerns and eventually became an assistant director where he usually was in charge of the second units which were involved in action scenes.