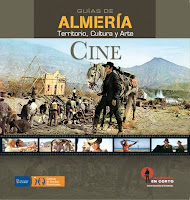 The County Council welcomed the 12 hours the filing of a new installment of the collection of the IEA
Evaristo Martinez [08/12/2011 - 16:03]
Juan Gabriel García, coordinator of the publication. [John Smith]
"Almería en Corto” returns to become today the perfect setting for the baptism of a new book on the cinema. It is Cinema, the tenth installment of the series of Guides Almeria Territory, Culture and Art ', published by the Institute of Almerienses (IEA). With over two hundred pages, abundant and valuable artwork, this title traces the footsteps of films shot in the area, from different angles.
The Origins.
According to journalist John Gabriel Garcia, the idea was planted during his adventure in the European Heritage Days held in 2009 at Andaluz. “Alfonso Ruiz, who coordinated the event and also coordinated the IEA guidelines, included as an element to the movies and to claim our heritage in the province. It was an important first step and there began the chance to shape this project.”
A Choral Work.
Like the other guides IEA, Cinema has brought together a group of specialists in the field. “Something that is part of the essence of the collection is to form a team that, to a greater or lesser extent, would join those who have contributed their knowledge, research and have been concerned, especially in recent years, to disclose that legacy,” says Garcia. Still, “given the complex nature of the work,” the reporter notes there may have been “someone in the pipeline,” “Furthermore, it is impossible to name the Almeria 'anonymous' who made the dream of cinema come true in Almería. To all of them, I especially, dedicate this work. "
Point of Departure.
The book aims to provide "dynamic and global vision" and Juan Gabriel García is a "starting point" that will encourage stakeholders to deepen their relationship with film in Almeria, “A field in which there is a great growing of literature and more extensive work.”
For All Ages.
One of the objectives of the authors has been that the guide is available for all audiences, regardless of their subject knowledge. “The guide will appeal to both the moviegoer and the strictest inexperienced amateur, and even appeal to those readers who want to learn about a different province, in the footsteps of the seventh art.”
Tourism Cinema.
In this regard, Cinema presents a series of routes that follow the wake of major productions, a way to reclaim that which remains unfinished by film tourism. “In other provinces with a less intense cinematic history than ours this aspect is much more enhanced. I think the future of cinema in Almería is closely linked to tourism. Very few places in the world can boast that their views have been see by such famous characters as Lawrence of Arabia, the 'Man With No Name', Patton, Conan, James Bond and Indiana Jones. Almería has traveled through film around the world, now we just need to communicate it well with this reality, and take advantage of Almeria and it will once again become a benchmark for international film. It is possible,” concludes Juan Gabriel García.
Experts in the Film 'Made in Almería'
The guide Cinema published by the Institute of Almerienses has assembled a group of specialists in the history of film shot in Almeria, Adolfo Iglesias and Javier Hernández, Juan Jesus Lopez Rodriguez, Jose Marquez Ubeda, Jose Enrique Martínez Moya, Juan Enrique Miranda Perez and Maria del Mar Coto Verdejo. In addition, Gregorio Perez Santander has been the graphic designer of the book.
YouTube link: http://www.youtube.com/watch?v=giT0JqF72eU
Posted by Tom B. at 6:13 AM