Once Upon a Time in Tabernas: Spanish spaghetti western set for sale

In the late 1960s Leone arrived in Tabernas with carte blanche to sketch out a film that would go on to rank among his most ambitious: Once Upon a Time in the West (1968).

[In the late 1960s Leone arrived in Tabernas with carte blanche to sketch out a film that would go on to rank among his most ambitious: Once Upon a Time in the West (1968). Photograph: Moviestore Collection Ltd/Alamy]

Rising up from the rugged arid landscape, the swinging doors of the 19th-century saloon open on to a wide, dusty street dotted with stables and hitching posts for horses.

It’s a storied piece of the US wild west – in Spain – and it’s for sale.

The site near the southern Spanish village of Tabernas hints at a singular mix of cultures that came together decades ago to create a product known the world over; starting in the 1960s, a cohort of mostly Italian film directors capitalized on the area’s chiseled crags of rock to capture their take on the western genre. 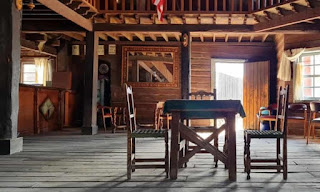 [The 19th-century saloon on the purpose-built set near the southern Spanish village of Tabernas.]

Punctuated by shootouts, tough-talking cowboys and sweeping camera angles, these spaghetti westerns, as they came to be known, were credited with reviving a fading genre as they projected the American west back on to itself.

Among the best known directors of the genre was Sergio Leone, the Italian whose films such as The Good, the Bad and The Ugly and A Fistful of Dollars catapulted Clint Eastwood to stardom.

In the late 1960s Leone, still flush with success, arrived in Tabernas with carte blanche to sketch out a film that would go on to rank among his most ambitious: Once Upon a Time in the West.

He had his team set out to build a slice of the west as a backdrop for a railroad-themed showdown between actors Henry Fonda and Charles Bronson.

Five decades later, the eight-acre set built for the film is on sale for a cool €2.8m. “What we’re selling is a small piece of Almería’s history,” said José Ruda of real estate agency Grupo Rukasa. “This is a place where memories and anecdotes were forged.”

Little has seemingly changed since the set stood in for the film’s Sweetwater Ranch – save, that is, for the steady deterioration that has gnawed away at the one-horse town where gun-toting cowboys Fonda and Bronson once swaggered through to a haunting soundtrack composed by Ennio Morricone.

“When it’s windy, you see the tumbleweeds roll though,” said Ruda. “And you think, ‘OK, where are the guys with guns?’”

The site was later used to film other westerns including “Buddy Goes West” and “Rustlers’ Rhapsody”.

Today the site hosts a flagging tourist attraction – the smallest of three western film sets that can be visited in the area – and is sporadically used to film adverts and music videos. But its claim to fame remains that it was purpose-built for “Once Upon a Time in the West”, a box-office flop that has since been championed as one of the finest westerns ever made.

It’s a connection that the owners, who are aiming to retire after looking after the place for more than four decades, are hoping to see endure, said Ruda.

Since the listing went up, calls have come in from as far as Germany, England and the Netherlands. “The owners would love to see the site restored to the vibrancy it had in the 70s and 80s, when directors poured in to film there,” he said. “They felt like they were part of a family.”

This history has since melded into the identity of the area, he said. For more than a decade, Tabernas has hosted the Almería western film festival – billed as “Europe’s biggest movie event dedicated to the western genre” – which seeks to deepen its singular link through activities such as “western tapas” competitions and faux gunslinging shows.

“This is not the place to set up an amusement park,” said Ruda. “There’s so much history you can already tap into here.”