Who Are Those Singers & Musicians? – Ico Cerutti 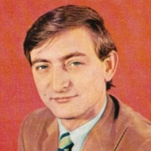 Federico ‘Ico’ Cerutti was born in Turin, Piedmont, Italy on September 3. 1936. He was an Italian singer, songwriter and guitarist. He was a member of the ‘Rock Boys’ in the 1950s but left to devote his time to jazz with Franco Cerri and the Renato Sellani Orchestra. Ico then joined a group led by Bruno De Filppi as a singer and guitarist. He was also a singer for the Gino Peguri ensemble.He then joined the Clan Celentano in the early 1960s before finding success in 1964 as a solo artist under the name Johnny Banjo with the hit 45 The Banjo Man. In 1966 along with the Clan Celentano appeared at the San Remo Festival singing The Boy from Gluck. Later that year he married Caterina Mariella

As a composer, among other things, he wrote the music for the son Piu forte che, You can. Cerutti died on June 18, 1999 in Zoagli, Genoa, Liguria, Italy at the age of 62.