Who Are Those Singers & Musicians? ~ Sammy Barbot 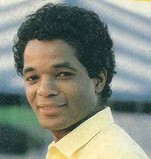 Jacques Édouard Barbot was born in Lamentin, Martinique on September 5, 1950. At a young age Barbot moved to Paris with his family. In the early 1970s he started singing in restaurants and clubs, and he eventually took part to the French version of the stage musical Hair.

In 1975 Barbot appeared in the film “Hallucination Strip” and performed the film's opening song "We've Got A Lord". The song appeared on the film's original soundtrack.

He was discovered by two RAI Italian television writers, in 1977 he moved to Italy to host the musical show ‘Piccolo Slam’, of which he also sang the two theme songs. In 1979 he hosted ‘Popcorn’, a successful Canale 5 show he had created.

In 1981 Barbot got his major hit, "Aria di casa mia", the opening theme song of his TV show ‘Happy Circus’, which peaked at number 1 on the Italian hit parade. The song was written by his wife Vivi.

In the following years he continued his musical and television activities, slowing his activities in the second half of the 1980s.