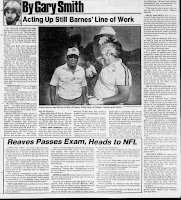 The night was finished but Piggy Barnes and Bosh Pritchard and Steve Van Buren were not. This was Sunday, the first reunion of the Eagles ‘’48-49 championship team, but now the last backs had been slapped and the boys were fading into the darkness one by one like whispers from the past.

Piggy and Bosh and Van agreed they had a few more beers memories to empty. So they drove to Piggy’s room at the Ramada Inn, sat on the beds and began hacking their way back through the decades.

They talked so deep into the morning that Bosh ended up yanking the mattress off one of the beds and sleeping on the floor rather than drive home to Cherry Hill. They are like kids again, these 55 and 60-year-old men wiping the foam from their lips and poking each other in the ribs. Piggy has been up until nearly 4 a.m. the last two nights. He says this reunion reminds him a little of the three-day power-drinking tear the team went on after it won its first title in ’48.

“And there’s something that still binds us together now. You can see it, the way we grab one another, hug one another. We know that at one time, we went as high as you can go in a profession.

“We don’t have to bullbleep each other… we walk up to one another and we know. How much success and how much money we’ve made since then is unimportant.

Barnes was just a cinder block on those title teams, a defensive and offensive lineman who worked in the grime while Van Buren and Tommy Thompson and Pritchard made the scoreboard twitch. But today Van Buren works in a general store, Pritchard does PR work for a real-estate firm, Thompson sits in his Arkansas home, sits still so the arthritis won’t flare… an Piggy Barnes has become the real star of that ’48-’49 bunch.

Piggy plays Sheriff Dix in “Bronco Billy,” the new Clint Eastwood movie. He was Yank Murdoch, the meanest barroom brawler on earth in “Every Which Way But Loose.” He has played in about 100 movies and appeared in TV shows over 500 times.

EVERY TIME SOMEONE walks up and says they saw him on the late show the other night, Piggy gets this quiet grin on his face because he knows another royalty check will be arriving in the mail. The movie is usually a western and Piggy is usually the villain.

“The baddies are the good parts,” said Barnes, who played in yesterday’s NFL Alumni Charity Golf Classic at Whitemarsh Country Club. “There’s more depth to the character. I usually try to make them real likeable. That’s the kind of baddie people hate the worst.”

Barnes is 62 now, with white hair coming down the sides of his head in gusts and a mustache that would make Wyatt Earp proud. He has had to let his holster out a few notches to accommodate his gut, but even here in the plush shade of Whitemarsh you can still picture him swiveling a leg up over a saloon stool.

His acting career started two years after his Eagle career ended in 1951. Al Wistert, another former Eagles lineman, had been asked to play in a God-awful live western that WCAU was airing daily, named “Action in the Afternoon.” Wistert had another commitment but recommended Piggy instead and the rest is history.

“That was the worst show, God ever put on this green earth,” Barnes laughed.

“WCAU HAD BUILT this set of a western town right there in the parking lot on City Line Ave. The first day I’m there they wanted to have a scene with me and this other guy in a fight. So we start knocking the bleep out of each other and we knock the shole set down. The actors are dying laughing and the director comes running out of his booth screaming, “What are you doing to me?”

“Every time an airplane flew over we had to turn up the background music real lead to drown it out, and we’d be hollering our lines over the music. Then they’d turn it down and we’d still be yelling our lines.

“One time I was riding into town with a group of baddies and I was supposed to jump up on a bale of hay and fire my gun and then get shot by the sheriff. Well my gun had fallen out of my holster somehow, so I jump up there and stick my finger out like it’s a gun and fan my hand a few times and go boom-boom and they film it that way. Oh, it was hilarious.

Piggy was one cowboy you wouldn’t want to meet in a dark saloon. He finished third in the country in a curling competition, was runner-up in a national AAU wrestling tournament and was one of the first players in the NFL to lift weights in the off season. 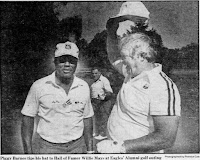 THE PLAYERS CALLED HIM “Muscles” and cracked jokes about it, but Rams running back Vitamin Smith didn’t giggle when Barnes sat on head during the rain-soaked ’49 title game in Los Angeles.

“I almost drowned him,” remembers Piggy, who lives in Studio City. Calif. “I was sitting on his head and he was in this big puddle and he was spittin’ and sputterin’. God damn you Piggy,’ he says, I just got down in the mud and wallowed like a pig. That’s how I got my nickname. I got caught stealing a pig during the Depression.

His team won the ’48 championship game in a snowstorm so numbing that some players sprinted straight from the field to the showers, letting the hot water hiss over them even before removing their uniforms. Then they beat the Rams in the mud in ’49 and suddenly the moment was over and the team was tossed to the wind.

Piggy Barnes is the one man left from that club with a public forum, but he does not use it to milk the glory days dry.

“I don’t even let anyone know that I used to play football,” he said, “I don’t wanna play any stupid football player parts.”

THE ONLY THING the same with sports and acting is the part where you get knocked on the ground. As an actor you get knocked down every day. Actors are the most resilient people in the world. You have to learn to bounce back.”

You will see him swaggering down Main Street at sundown some night on the tube and his name will be Walter Barnes in the credits. But don’t get the wrong idea Piggy is not some one-dimensional thug typecast for eternity as a bow-legged cowboy.

“That’s right, he said. “Not too long ago I had a role as a homosexual in a prison.”

If Bosh and Van Buren had known, they’d hat razzed him straight through dawn.