50th anniversary of the premier of “A Gunman Called Dakota”

Today marks the 50th anniversary of the premier of “Un uomo chiamato Dakota” (A Gunman Called Dakota), directed by Mario Sabatini as Anthony Green. It stars Gordon Mitchell, Anthony Freeman, Fedel Gentile. The film tells the story of bands of marauders, who after the Civil War, are roaming the West, devastating towns and attacking stagecoaches. A former Yankee official, Dakota (Anthony Freeman), comes across the remains of yet another attack. He finds a wounded girl, which he takes to a doctor in a town whose deputy sheriff, Scott (Fedel Gentile), has decided to wage war against the outlaws, and organizes an expedition against them. Asked to join, Dakota is saved from an ambush by bandits, in which the deputy sheriff’s posse all perish. Dakota discovers that the elusive leader of the robbers is Sheriff John Lead (Gordon Mitchell). To obtain evidence against Lead, Dakota, leaves town. In his absence, Lead kills or imprisons those who oppose his arrogance, and seeks to force the daughter of Deputy Scott (Tamara Baroni) to marry him against her will. Dakota returns in time to prevent the wedding and delivers the infamous Sheriff Lead into the hands of a federal agent. 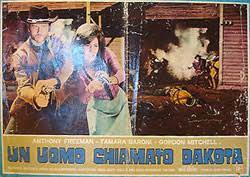