In Memory of Mark Gregory

Before starting, a premise is a must, the search for actor Mark Gregory began many years ago, and in the long period of time that has elapsed from then to today, we have repeatedly wondered how meeting him once would have been had before. Unfortunately, among the many variants that we have imagined, reality has far exceeded fantasy, and among these we have not taken into account the most extreme one. In the continuation of what we are about to tell you, in case you do not know Mark Gregory, we strongly advise you to read a brief summary of his career which can be recovered at this link: http://appuntidalweb.blogspot.com/2012/06/che- done-mark-gregory.html. In the same, written in 2012, there are many inaccuracies, but in our partial defense goes the fact that it was drafted on the basis of the little news that circulated on the web at the time. The first error concerned the real name, which is Marco De Gregorio, and not, as has always been believed, with the particle "Di" in front of the surname. We learned of this by consulting the working documents of his first film, “1990 Warriors of the Bronx”. Another discovery made by studying the documentation is that at the time of the shooting he was not 17 years old, as previously thought, but he had recently come of age. The exact date of birth is May 2, 1964. It is true, however, that he grew up in the area of ​​Porta Pia / Piazza Fiume in Rome, which is indicated by the street of residence reported in the documents of the time.

Thanks to these new discoveries, the research was able to restart with some more certainties, and in this a special mention goes to Alessia Brioschi and Alessio Di Rocco. Also because what little we knew about him, after his abandonment of the film sets in 1989, was not much. The only statement, which gave us some indication, is the one released by Bobby Rhodes (see the aforementioned link) when speaking of his death he said "... Then at a certain point (Mark Gregory) he abhorred this (cinematic) environment and withdrew ... so, suddenly. Now he is a painter and a madonnaro. I don't know what disappointed him and pushed him to cut everything drastically; but one thing is certain: he doesn't want to know anything more about cinema. Strange, because Marco gave up just when he was at the height of his success, when he was starting to get paid well ...". We can confirm, thanks to the testimonies collected later, what Rhodes said, because in order to live he had returned to try his hand at what had been his first great love of him, drawing. Son of an artist, his father was a painter and sculptor, Marco had started painting full time, and among his recurring themes there was, juxtaposed, the depiction of the Madonna. We got acquainted with it from the people who knew him and who were able to admire his works.

We also discovered that until the early 2000s he carried out his artistic activity continuing to live in Rome, in the Tuscolana area until, but the news should be confirmed, a scam led him to lose his house and everything he owned, with consequences that also had repercussions on his relationships with close family members. What happened will mark him so deeply that he will soon leave the capital to settle in Castel Madama (Rome), where he buys a small house in the old part of the town.

Marco unfortunately also brings his ghosts with him to the new house, which have been haunting him for years. How quickly he had added to problems that had persisted before. He arrives at Castel Madama with only a guitar and his luggage. The town is small and such a tall boy does not go unnoticed, he is immediately nicknamed the gentle giant. Because the first thing that transpires is his kind soul, on the other hand he is shy with anyone who approaches him. He avoids human contact and does not establish relationships with anyone. In any case, his is a familiar figure to everyone, he is often seen passing through the streets of the country with his canvases that he trades periodically bringing them to Rome, by the bus that goes back and forth to the capital. He doesn't talk to anyone about his cinematic background, even if some are aware of them as I am aware of the fact that to film them he went to the United States. As shy as he is, on the other hand he also knows how to be altruistic. One of the few people who had contact with him told us about an episode that took place during the Madama Margarita palio which is held annually in the small town. The supporters of the winning district during the celebrations, also due to the euphoria generated, had begun to light torches that had accidentally set fire to neighboring brushwood with fireworks and other pyrotechnic material. Before the irreparable occurred, with certainly serious consequences, Marco was the first to intervene to put out the flames. on the other hand, he also knows how to be altruistic.

In addition to the population, the social services also noticed him and his hardships, and they begin to follow him for assistance. It was confirmed to us that he was being followed daily and regularly. Unfortunately, the dark evil that clouded his mind will still take over. Marco on January 31, 2013 will take his own life by ingesting a mix of psychotropic drugs dissolved in hot water. The funeral is at the expense of the municipality, at the ceremony in addition to the municipal employees and delegates there is no relative and no friend. No relative will even show up to claim the house which will later be auctioned. Those present at the entombment remember the tears of those who tried to stay close to him until the end, not accepting that unexpected epilogue. He is placed in an anonymous grave in the city cemetery. 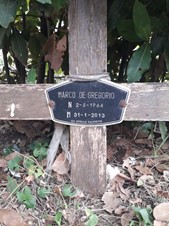