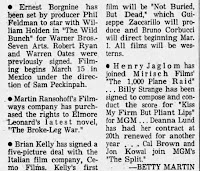 Brian Kelly has signed a five-picture deal with an Italian film company, Cemo Films. Kelly’s first film will be “Not Buried, But Dead” which Giuseppe Zaccarillo will produce and Bruno Corbucci will direct beginning March 1 (1968). All films will be westerns.