We continue our search for filming location for “A Bullet for the General”. Upon reaching their camp, the wounded are cared for while the rest of the men eat and listen to a prayer given by Santo. Chuncho tells Bill that Santo is his half-brother and that he doesn’t know the guns that are stolen are sold to Gen. Elias but given away to the rebels to fight the Federales. Bill quizzes Chuncho on where Elias’ headquarters are and when they will be going there. Chuncho tells him they need more guns first.

The scene was shot in the mountains surrounding Guadix, Spain 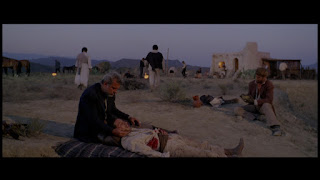