ROME – Italian westerns continue their triumphant march, even if they are now working themselves up into a paroxysm of sadism. The organizer of the Italian western is Sergio Leone, a plump, bespectacled gentleman of 40 years, who likes fishing and classical music: somebody, in short, the exact opposite of the ultra-tough heroes of his films.

The first film “Per un pugno di dollari” (For a Handful of Dollars) was claimed, with justice, to be the first film in years that got the Italians to the cinema again.

Sergio Leone was a man, who for many years, all the way through 50 films, was content to play the second fiddle as the director’s assistant. One day he broke loose, and shook everybody. His second film, “Il buono, il brutto, il cattivo” (The good, the bad and the ugly one) reached heights of sadism, and the people kept going.

This closed his western trilogy and Sergio Leone then wanted to do “Pancho Villa” again. By now, however, there must have been a dozen private detectives on his trail. His rivals had smelled money and they bought up the original Pancho Villa script almost before the thought had formulated itself in Leone’s head.

All the same – says Leone – he will still do Pancho Villa. The others will us Yul Brynner, he will take Burt Lancaster.

According to Leone, the American westerns are using old, worn-out formulas. “They are imitating my western” says Leone. “In the Appaloosa,” Marlon Beando is copying Clint Eastwood. The Americans are all confused at the moment. The 100 TV channels are paralyzing their talent.”

Sergio Leone started producing westerns because of the crisis in the Italian film industry. The Titanus company had gone bankrupt and there was news from Germany that homemade westerns had had success there.

After he had made “A Handful of Dollars,” the experts told Leone he would never make any money out of it. But his latest film threatens to make more money than “Gone With the Wind,” or “The Ten Commandments.”

Leone has the lowest possible opinion of Italian porducers. He says they understand absolutely nothing about films. He quotes as an example the rapid sale of “Bitter Rice,” because the producers thought it would be a flop.

“Thank God for the Americans,” says Leone. “Now that they have seen that we are continuing to producer successful films, they get into direct contact with the directors, avoiding the Italian intermediaries who, without understanding a thing, earn millions.”

Sergio Leone’s imitators are already countless in Italy. The screens are literally running with blood.

So Leone is taking time off to do a different type of film. It is the story of the anarchist Bresci who assassinated Umberto I, King of Italy. Marcello Mastroianni plays the role. 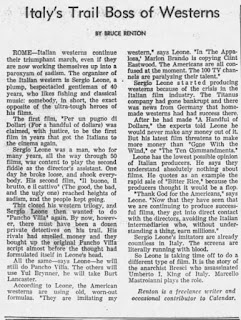