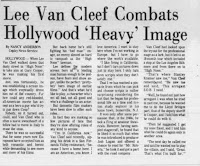 HOLLYWOOD – When Lee Van Cleef walked down that dusty street in “High Noon” to take aim at Gary Cooper, he was making his first movie.

And, less fortunately, he was establishing a screen image which eventually drove him out of the country. For how could any red-blooded all-American movie fan accept as a hero a guy who’d try to don Coop?

Nobody as it turned out, could, and Lee Van Cleef who often a suave sweetheart of a fellow had to move to Italy to erase the onus.

There he was so successful that for some years now Europeans have accepted him as both romantic and heroic while demanding to see more and more of his films.

But back ome he’s still fighting his “bad man” image, an enemy almost as hard to vanquish as the “High Noon” lawman.

Lee defines the modern screen here as “a leading man human enough to be jealous, have fears and show anger, unlike the perfect ‘pretty-boy’ hero image of earlier films”. And that’s what he’d like to play, a character who’s not all bad, not all good and who’s a challenge to an actor.

But domestic film makers have been slow to offer such roles.

In fact they are making so few pictures of late that they’re slow offering roles of any kind to anyone.

“I’m in California now” Van Cleef said recently, sipping his drink in a San Fernando Valley restaurant, “because I have a home here. I amn an American you know. I love America. I want to stay here when I’m not working in Europe, but I have to go where the work’s available.”

“I like living in California but I don’t turn pictures down just to stay here. I only turn down scripts when they don’t satisfy me.”

That he’s reached a pinnacle from which he can pick and choose scripts is rather surprising considering the fact that he began his professional life as a time and motion study engineer in his home town of Sommerville, N.J.

It was only after some persuasion that, in the 1940a, he took a fling at amateur theatricals. However, having sampled stagecraft, he found that he liked it so much that when he was introduced to producer Josh Logan and offered a chance to read for “Mr. Roberts,” he took it and got a part with the road company.

Van Cleef had looked upon the tryout for the professional stage as a lark, but it led to a18-month tour which included a stop at the Los Angeles Biltmore and from there on to “High Noon”.

“That’s where Stanley Kramer saw me,” Van Cleef remembered. “He saw me and said, “This arrogant S.O.B. I need.’

“Well, he found out just how arrogant I was when he tried to cast me, because he wanted me to do the Lloyd Bridges part, that of the deputy sheriff to Cooper, and I told him what he could do with it.’

“Then he suggested I get my nose fixed, and I told him what he could do again only in another area.’

“The next day he called me and said he wanted me to play the villain, and I said, ‘Great. That’s what I’m built for.’”