Somebody doesn’t like Mickey Hargitay very much. The other night he or she crept into Hargitay’s Rome apartment, hammered on the head and stabbed him.

Hargitay, recovering in a private clinic, won’t say who the attacker may have been. “I’m confused,” said Jayne Mansfield’s former husband.

But the producer of his latest picture, an Italian western called “The Sheriff Won’t Shoot”, said jealousy was the motive.

Hargitay had been photographed with French actress Marie Vincent recently at Cannes Film Festival. Miss Vincent later received a note telling her to give Hargitay up “or I’ll kill him”.

“I always try to be nice to people” moaned Hargitay, “I don’t see why anybody would do such a thing”.

The wounds were described a s superficial. 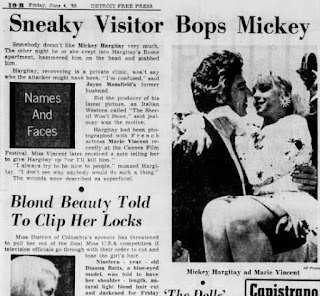