Who Are Those Guys? ~ Fabian Conde 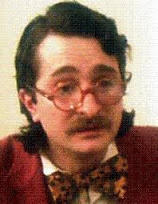 Fabian Conde was born Domingo González García in Las Palmas, Grand Canary Islands, Spain in 1932. He studied for a teaching degree and acted in amateur groups during his college years. He was a member of the Los Ases Melodicos variety group before settling down in Madrid where he studied with Carmen Seco and performed with Irene López Heredia. He then produced children’s shows at the Maria Guerro Theater with Doroteo Martí and acted in ‘The Traveler Without Baggage” at the Beatriz Theater with the Luis Arroyo Theatrical Company. He appeared in a number of variety shows for the next several years before signing with the company of Alfonso Real and Luis Barbero. He would go on to appear in some 500 film and television shows beginning in 1965. He then returned to the theater with ‘La sexy cateta’.
There is some debate on whether Fabian is still living or has past on, since his last appearance on film was in 2000.