The Parish Priest of Sad Hill

The priest from Burgos Domingo Contreras participated in the filming of the scene at the famous cemetery of the film “The Good, the Bad and the Ugly”, in the vicinity of Silos. 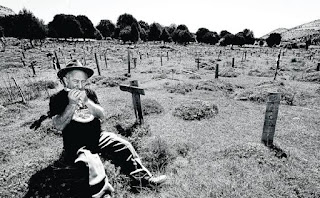 The fact is that Domingo Contreras was going to be a bullfighter or a priest. And as a child he saw one day the NoDo that gave an account of Manolete's sad fate, he took the path of the cassock, many years before arriving at the seminary. He was the youngest of five boys, the sons of a father who combined administrative work with organist, sacristan and director of the Salas de los Infantes music band. So he always walked between priests and musical scores. All his brothers played an instrument and he, who began with the piano, ended up taking notes on a humble harmonica, his faithful friend for more than half a century. And there he is, sitting on his grave in the Sad Hill cemetery, playing some bars composed by Ennio Morricone for the movie “The Good, the Bad and the Ugly”.

There are thousands of graves in this valley, covered by the beautiful flowers of the heather, but there are no dead under the burial mounds of rough wooden crosses. A few years ago a group of friends decided to unearth this imaginary cemetery in which Clint Eastwood, Eli Wallach and Lee Van Cleef staged a triangular duel to the death to achieve the $ 200,000 hidden in one of the graves.

The peak of the most popular western in film history took place in Silos. In 1966, when Domingo was 19 years old and a clueless student. "The crew from the movie" had arrived. And that changed the life of the entire region, at least for a time. It all started like this: “My brother told me that they were looking for musicians and had put an advertisement in the bar. As I had nothing else to do, I signed up and they caught me right away. I went with someone who played the drum but as he was fat they told him no, that the scene was in a concentration camp and you were supposed to look hungry.”

We climb a hillock in Carazo, which they call the Majada de las Merinas. It was there that Domingo had his moment of cinematographic glory, playing the harmonica in the Betterville band, where Sergio Leone had moats, palisades and a stockade built. The group of musicians plays so that the tremendous beating that Corporal Wallace gives Tuco is not heard. The band muffles the screams of torture. You can still see the moats and small remains of the buildings, although the priest relives every moment with the expression of a child. He knows entire dialogues and when he reaches the place where the scenes were shot he reproduces them making different voices. He knows every tree, every sign. And sometimes he says "fuck me."

In that madness (it can be seen in a magnificent documentary entitled “Unearthing Sad Hill”), set in the Spain of those years, the arrival of the cinema marked the history of a generation of residents of several towns. They paid the extras three hundred pesetas a day, which was a lot. Although Domingo took more because the one who had the singing voice among the musicians turned out to be a clever negotiator. "He asked us to play along, and he went to the man in charge and told him that we had to charge more, that we were professionals and he, playing in a nightclub, made two thousand pesetas in one night. And the other one who said no, that it was a lot… He gave us a sign and we pretended we were leaving and in the end they gave us that. He laughs heartily, because they got double.

On the first day of filming the scene, Leone began to argue with the cinematographer and the operator, and the morning went on with their fights. “We took the opportunity to be with the Clint Eastwood and how we had to return ... well, another two thousand. I, who was a starving student, gave you ten pesetas to buy pasta on Sunday”. With the money, the tuition for the course was paid and a Espasa-Calpe encyclopedia was bought.

The imaginary and the real come together in these landscapes. We stop at the entrance of a rough road past Hortigüela, in the valley of the Arlanza river. The priest remembers that the barren landscape is now covered by imposing well-fed trees. Here a bridge of more than one hundred meters was made, the cinematographic frontier, Northerners on one side and Confederates on the other. The blasting is the most spectacular scene and had to be repeated three times. The first because it was poor and Leone wanted something great, the second because the 400 tons of TNT placed exploded prematurely. The director had given the privilege of giving the signal to a colonel in the Spanish Army (who actively collaborated in all the set construction work) and he rushed forward. The bridge was blown up and the cameras did not record anything. Domingo points out the places, hidden by the vegetation. It would be difficult now to reconstruct that moment and transform the dream into something tangible.

We follow the path in silence. The parish priest knows each curve shaded by the junipers, the cliffs from which vultures sprout. Actually every place in this province, because he has already lost count of the towns where he has been a priest. He has been going out in the movies for two minutes for more than half a century and also exercising a vocation that was never less. Last Sunday he gave mass in five towns. He also spent a few years in Ecuador. “In addition to the religious thing, the life you lead in the village is very important; you have to get into their lives, on a day-to-day basis, help people,” he says. And that you also have to know how to handle yourself, "because making many friends in small places can be dangerous, it conditions you, because there are always envies."

He preserves the innocent look of a child. He laments the abandonment of the monastery of San Pedro de Arlanza, which in the film was the mission of San Antonio. There is a beautiful hermitage at the top of the hill, that of San Pelayo, which also appears in some frames. He moves through the mountains with the agility of an expert hiker. And strokes the harmonica in his pocket. There is a bar in a nearby town that he never takes it to because the owner is determined to buy it. Everyone knows Domingo and knows of his good character. We stopped for a drink of water, not like "Lee Van Cleef and all those who drank their whiskey through a tube." I ask him if he's good at lecturing. He thinks so, "I prepare them because I like to know where I want to go."
Posted by Tom B. at 6:46 AM