We continue our search for filming location for “A Bullet for the General”. After the opening credits play the train with a sleeping Bill Tate aboard travels on through the Hernan Valley until it rounds a bend and a soldier sitting on the cow catcher on the front of the train’s engine spots something standing in the middle of the tracks ahead. He alerts the other three men with him of what is ahead. The train comes to a halt waking Tate from his slumber. The soldiers are ordered by Lieutenant Alvatro Pereda (Aldo Sambrell) to approach the officer and release him from the stake he is chained to. As the four soldiers approach the man they are shot down in an ambush by revolutionaries hiding on the ridges that border the tracks. Another attempt is made to free the man but they are fired upon a killed. Suddenly a lone rider appears on the ridge beating a drum and declaring himself ‘El Chuncho’. Lt. Pereda, not wanting to kill the officer on the tracks tries to save him one last time but is shot and killed by ‘El Chuncho’, before dying he orders the engineer to build up steam and move forward to their destination. The train runs over the office and moves on. 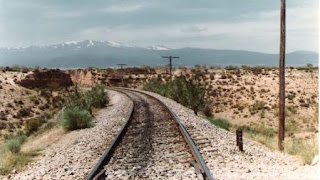 This scene was filmed along the Guadix train line in the Hernan Valley.