Voices of the Spagetti Western ~ Day of Anger 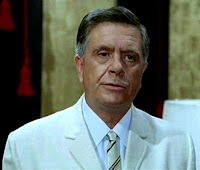 Paco Sánchez combined his life as an actor with both film, TV and dubbing. He acted in various Spanish films of the 1950s and 1960s, in films such as “Crimen imposible” (1954) directed by César Fernández Ardavín; El canto del gallo (1955); La gran Mentira (1956), directed by Rafael Gil; y Siete minutos para morir (1971) by director Ramón Fernández.

A very cultured person, Francisco Sánchez always had his tape recorder and dictionary at hand to translate and adapt the texts which he worked. He like to smoke a pipe and do crossword puzzles. When he died in 1988 he left the dubbing rooms dark, where this actor, a teacher of masters in the world of dubbing, always shines.
Posted by Tom B. at 7:47 AM