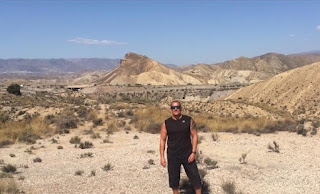 In Sergio Leone's "For a Few Dollars More" several locations were used for the prison that housed Ramon. The opening roof scene was filmed at the same location the Mission of San Antonio was used in his "The Good, the Bad and the Ugly", the interior scenes where the warden's office was shown and the staircase was at the Almeria bullring. The shots of the cell block were filmed across the street from the parking lot at Mini Hollywood/Oaysis in a empty lot. After Indio is let out of his cell the gang moves down the corridor between the cell blocks and the down a staircase. The staircase opening is just a hole which goes down the side of the small plateau where the cell block was constructed and then the camera picks them up at the staircase at the bullring.

If you go there today you can where the cells were by lining up Monte Alfaro and a cell block was built to the left and right with the mountain shown in the center.