The cemetery of “The Good, the Bad and the Ugly” resuscitates

The documentary "Sad Hill Unearthed" follows the evolution of the works of a group of fans to unearth the cemetery built for the legendary film by Sergio Leone at a location in Burgos in 1966, which was built with the help of the Spanish Army to host the most exciting duel of the spaghetti western 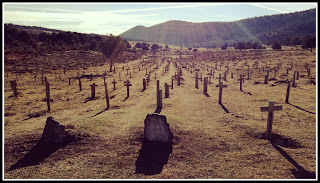 When Joseba del Valle first stepped into the Sad Hill cemetery he was not even aware of being on sacred ground. "We did not realize where we were  until we climbed the mountain and saw the concentric circles." They had found their particular El Dorado, the remains, underground but slightly insinuated in the terrain, of what had been decades ago the cemetery raised by the team of "The Good, the Bad ugly and the Ugly", with the collaboration of the Spanish Army, to shoot the final duel between Clint Eastwood, Lee Van Cleef and Eli Wallach. One of the most iconic film sequences and probably the "best" of what was called "spaghetti western" in a lost spot of Burgos, between Santo Domingo de Silos and Contreras, in the valley of the Mirandilla.

For half a century that cemetery of more than 5,000 crosses and a large circular central paved arena slept in the sleep of the just. The planks of the burials were recycled by the civilians to cover leaks in their roofs, while the rest of the structure was buried under 20 centimeters of earth. But, from that initial visit of Joseba del Valle and his meeting with other fans of the film to form the Cultural Association Sad Hill, this portion of mythical land began to revive, to emerge from the earth, as narrated in the documentary "Unearthing Sad Hill", by Guillermo de Oliveira, which provides double enjoyment to the film buff: on the one hand, it digs in the anecdote of the "Spaghetti Western" par excellence; and, on the other, it illuminates the creativity and creative power of the fan phenomenon and the sentimental truth that underlies that great lie that is cinema.

The story of three scoundrels


"The Good, the Bad and the Ugly" was destined to be the finishing touch of Sergio Leone's "Dollar Trilogy". With a 1.3 million budget, it would cost more than the two previous films combined: "For a Fistful of dollars" and "For a Few Dollars More." It was, in the words of the Italian director, "a picturesque epic western, the story of three magnificent and friendly scoundrels set in the context of the Civil War." The ultimate goal: get a $200,000 treasure buried under the grave of the unknown soldier in Sad Hill Cemetery. To recreate the Wild West, Leone turned to Spain again. "The north of the country looks like Virginia, and the south is like Arizona and New Mexico," he said. In Almería, he filmed a good part; the rest, in Burgos. There the scenes of the concentration camp, of the blowing up of the bridge and, of course, of the cemetery passed.

A final climax that continues to awaken the admiration of the cinephile world: "Nothing as great as' 'The Good, the Bad and the Ugly' had been released. I do not remember getting so excited with a film as with this one and it's largely because of the cemetery scene, "says producer and producer Joe Dante; "You could frame any scene in the movie and it would be a fantastic work of art," says critic Stephan Leigh; for the editor Eugenio Alabisio, this is "the most beautiful piece of cinema ever filmed." But the grandeur with which Leone and his collaborators had conceived the sets was not within their reach without a special collaboration. Sergio Salvati, the director of photography, tells how "Franco's government helped Leone because he brought a lot of money with his films, so he gave him 1,000 young soldiers along with a captain and a general." This workforce came directly from the barracks of San Marcial de Burgos in exchange for 75,000 pesetas for the orphans. The soldiers, who worked on the sets or as extras (dressed as Confederates and Yankees), were paid 150 pesetas a day, "and then, if you did something special like throwing yourself in the water and playing dead, you were paid separately.”, Recalls Juan José de la Horra. For the soldiers it was like a "paid vacation." They raised the more than 5,000 crosses and the central paving in the shape of a coliseum (for Leone was the "circus of fate") of Sad Hill under the 90 degrees of that July 66. The people of nearby towns, especially Hortiguela, also participated as extras and the bar of the villa more than benefited by the bustle of cinema. 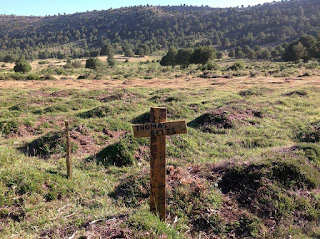 A Spiral of Tension

Once ready, Eastwood (the good guy), Wallach (the ugly one) and Van Cleef (the bad one) starred in the central wheel of Sad Hill the most exciting duel in the history of cinema. Almost 20 minutes of footage once they arrive at the cemetery until Eastwood (aka El Rubio) leaves Wallach (Tuco), who chases him from afar with his curses: “Rubio, you son of a bitch”. All that was barely half a page of Luciano Vicentoni's script. The conjunction between the rudeness and the epic of the outcome, the spiral of tension created by the assembly and the versatile direction of Leone, as well as the unforgettable soundtrack of Morricone, made that, for many, “The Good, the Bad and the Ugly” will go from being a mere movie to one of a full-fledged cult film.

For Joseba del Valle, David Alba, Diego Mateo and Sergio García, each of his father and mother and from different parts of Spain, Leone's film has been an obsession since, as children, they saw it. Over time, they became friends in the networks, exchanging photos, anecdotes and documentation about the film. In 2014, on the occasion of a tribute to Eli Wallach commemorating his death, they met and founded the Sad Hill Cultural Association. “We saw that we were not two crazy people, that there were many people who wanted to participate in this”, confesses Sergio. So they conceived a crazy project for the 50th anniversary of the film in 2016: unearthing the pavement of Sad Hill and replacing the crosses. These four magnificent and other volunteers converged every weekend, with pick and shovel, in the valley of the Mirindilla.

At first, it was frustrating, so they appealed to Facebook fans all over the world and the group of "archaeologists" increased with volunteers coming from Italy and France. The pavement of the central circle was beginning to appear: "The dream of my life was coming true; Maybe people do not understand it, but for me it was a magical place, "says Joseba. However, there were the crosses, lots of crosses. The Association launched a campaign to "sponsor a grave" and the funding rained down on them, because, as Joe Dante explains, what those fans were putting in place fit with "the need to feel part of something eternal." "That what you dreamed, the movie you lived, is not a dream, it is not fiction, it existed," adds Álex de la Iglesia. In 2016, Sad Hill already had about a thousand graves. The earth anointed by the steps of Clint Eastwood returned to present the aspect of 1966. The fairy tale of these admirers ended, how could it be otherwise, with the words of gratitude of the actor from the giant screen that the July 24 2016 (half a century after the premiere of "The Good, the Bad and the Ugly") installed in this spot of Burgos for a public that was counted in the hundreds. Then, with the sunset, the film was projected. Two hours later, the duel of the three in fiction filled the entire Sierra de la Demanda and, in particular, the cemetery rescued from oblivion. 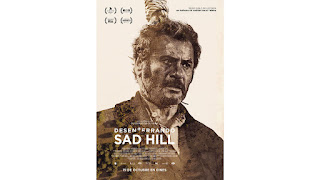