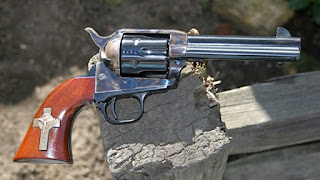 Perhaps a better title would be, “Hollywood Comes To Cimarron,” for ever since the demise of Tinseltown’s prop houses like Ellis Mercantile and Stembridge Gun Rentals, Cimarron has been the “go to” source for directors, actors and prop men looking for authentic replicas of late 19th century firearms.

As a result, Cimarron single-actions and lever-actions have appeared in such notable Westerns as “Chisum,” “The Quick And The Dead,” “Unforgiven” and “Open Range,” to name but a few. That, in turn, has led to Cimarron being the first to replicate many of the guns that have appeared in Hollywood westerns. One of my favorites is the cartridge-firing variation of the 1851 Navy that appeared in Sergio Leone’s spaghetti westerns starring Clint Eastwood as “The Man With No Name.” 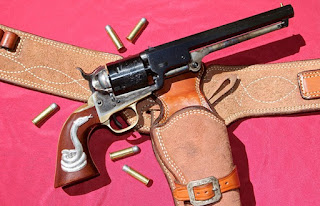 [Cimarron’s "The Man With No Name" 1851 Navy cartridge conversion has become one of the company’s most popular guns. Chambered to digest both .38 Colt and .38 Spl. cartridges, a fixed rear sight was added for practicality.]

Cimarron also recreated the Holy Smoker, a 4¾” .45 single-action with a gold-plated sterling silver cross on the right side of the one-piece walnut stock, duplicating Russell Crow’s sixgun in the 2007 remake of “3:10 To Yuma.” In addition, there is Cimarron’s unique 10”-barreled Wyatt Earp Buntline (as opposed to the normally encountered 12” versions by Colt and others). Inspired by the 1993 film “Tombstone,” starring Kurt Russell, it features an inlaid brass plaque, as seen on Russell’s gun (which is actually one of three consecutively numbered replicas used by him in the movie) that mirrors the plaques engraved by craftsman John Ennis on the 10”-barreled movie guns. 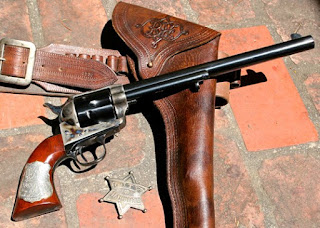 Just as authentic, the .45 Rooster Shooter, with its “Original” Cimarron finish, is a duplicate of the well-worn Colt Single Action Army supplied by Stembridge at Paramount Studios to John Wayne for many of his later westerns. Mike Harvey owns one of the three original Stembridge guns used by the Duke, so he was able to have Uberti duplicate it perfectly, including finger grooves on the left stock panel. Moreover, when I was visiting the Uberti factory, they were in the process of replacing the aged ivory-like polymer two-piece stocks with an improved “Generation II” version, as Mike had discovered a material that more closely resembled the color of the original stocks on the Wayne gun. 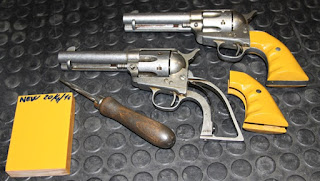 [The Rooster Shooter—a replica of John Wayne’s movie single action—sports Cimarron’s “original” finish and an improved “aged ivory” grip made from a material resurrected from the past.]

“It’s more translucent,” Mike said, holding the stocks up to the light. “This material hasn’t been available for 100 years, but we brought it back.”

Cimarron is also bringing back their replica of John Wayne’s Model 92 carbine (to be dubbed the Cogburn), with its distinctive pinched oval-shaped lever, which was originally modified for him by Stembridge. It became one of the actor’s trademarks, appearing in his numerous westerns, from “Rio Bravo” in 1959 to his final film, “The Shootist” in 1976.

Cimarron was also the first to produce a replica of the 1874 Sharps used by NRA Director Tom Selleck in his hit film, “Quigley Down Under.” The rifle from Down Under is an extremely accurate Pedersoli-made copy (thanks to Mike’s insistence on a cut and lapped bore) that sports an authentic—per the movie version—1859 patchbox; it is available in .45-70, .45-90 and .45-120.

In yet another tribute to Selleck, Cimarron catalogues an Uberti case-hardened Crossfire Trail 1876 carbine in .45-60 and .45-75 calibers, and accessorized this year by the addition of a leather Crossfire Model Cartridge Carrier that laces onto the stock, per the movie version. Another Hollywood-inspired Model 76 in the Cimarron lineup is the Uberti-made 1876 Centennial Tom Horn Rifle. Chambered in .45-60 and complete with the “stock detective’s” signature on the left sideplate, it is a duplicate of the Winchester 1876 rifle Steve McQueen carried in the 1980 “Tom Horn” western. Small wonder Cimarron is known as the home of the “shooting stars.”