50th Anniversary of Find a Place to Die

50 years ago today “Joe! Cercati un posto per morire” (Find a Place to Die) had its Italian premier in Rome. The film is a remake of 1954's “Garden of Evil”. Miners, Lisa and her husband/brother Paul Martin, are attacked at their gold mine, by Chato and his gang. Although they manage to fend them off, Paul has been trapped by some fallen boulders which have crashed following an explosion. Lisa rides to Nido de Aguila in search of help. She obtains help from a group of men including Joe Collins, a drunken former cavalry officer, Gomez and his shady partner who are gun-runners, and are motivated solely by a desire to get their hands on Martin’s gold, Paco a gunslinger, Fernando an athletic individual, and Riley a sinister and slimy person who claims to be a priest. Upon their reaching the mine, Joe and the others discover that Martin has been killed and the gold stolen by Chato, who has been working with Gomez. Back at Nido de Aguila, Collins organizes a defense against Chato, who is killed by Gomez, who then openly takes command of the outlaws gang. Fernando and Riley die, Joe, with Lisa, who has helped reformed his drunken ways, faces Gomez in a duel and kills him. The gold is recovered and Joe and Lisa head to California to start a new life together.

The film was solidly directed who turns out good performances from his actors. The score by Gianni Ferrio is one of the more memorable of the genre. 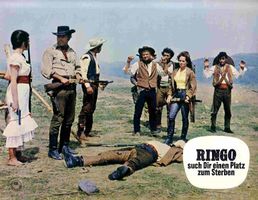