Who Are These Guys? ~ Eduardo Calvo 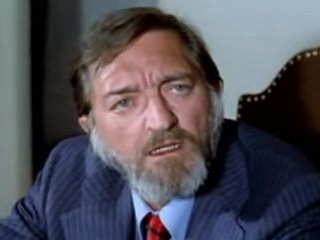 Eduardo and his older brother Rafael Luis Calvo were children of the famous film actor Rafael Calvo, and in the 1940s they decided to follow in his footsteps by playing small roles in the movies and dubbing foreign films.  Rafael Luis settled in Barcelona while Eduardo stayed in Madrid. Eduardo He began his career on stage in 1937 and ten years later, he made his screen debut in "El Verdugo", but his career in cinema didn't take off until the 1970s. He is known for his work on “Women on the Verge of a Nervous Breakdown” (1988), “The Heifer” (1985) and “Travelling Companion” (1979).

Unlike his brother, Eduardo combined his work in front of and behind the cameras until the end of his career, which brought a characteristic rough voice and a veteran presence.  He became a habitual dubber of cinematographic minorities like John Carradine and Walter Brennan and also dubbed himself in international co-productions.  In the cinema he worked under the direction of directors like Carlos Saura, Jaime de Armiñán, Juan Antonio Bardem, Luis Berlanga, Pilar Miró, Pedro Almodóvar, Jesus Franco and Francisco Rodríguez.  He acted in the TVE series ‘El picaro’ giving life to the character of Monipodio.  In 1983 he dubbed Alfred Hitchcock in the television series ‘Alfred Hitchcock Presents.’

All sources say erroneously that he died August 13th but it was actually July 25,1992.