We continue to our search for filming locations for the 1966 film “Navajo Joe”. When Jim Duncan arrives at the train he climbs aboard the engine and spots a saddlebag full of money. He blows the train’s whistle three times, the signal to his brother that he found the money. Joe is lying on top of the engine and reaches over the side grabbing Jim by the throat and chokes him until he passes out. 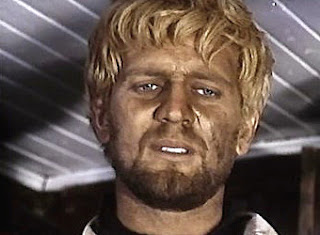 The scene was filmed at the railroad tracks at the unknown station near Gaudix, Spain