Alamo Kid was the hero of a western series that differs from similar from ones published in the popular weekly format of the authors, inserting into the narration a little more explicit violence and some sexier elements than usual. Alamo is a federal agent who loves frozen vodka and mutton roasted with pineapple! The Kid does not mind using his colt to end the life of those he sets out to capture. The series premiered on August 4, 1975 in #16 of the LANCIOSTORY magazine and was published for three years in self-concluding tales, by writers Anthony Macuso (Antonio Mancuso) and Vincenzo Monti while artist Giuseppe Montanari drew the adventures. 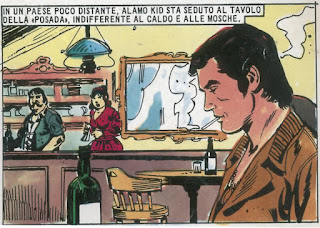 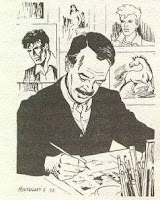 Giuseppe Montanari was born in San Giovanni Persiceto, Emilia Romagna, Italy on November 26, 1936. He made his debut in the comic book field in 1954 as a collaborator in Roy D'Amy's editorial office - with Renzo Calegari, Carlo Porciani and other great authors - who contributed to the “Three Bills” by Tea Bonelli 's publishing house.  Since 1956, he worked on Western stories for the Edizioni Alpe (appeared in appendix to the humorous puppet Cub and Tiramolla). In 1962, he drew the covers of some editions of Horn Editorial, including Gordon, Black Mask, Atomik. Since 1966, he has been working with the publishing house of Erregi erotic pockets (then Ediperiodici) by Renzo Barbieri and Giorgio Cavedon, who entrusted him among other things with the covers and stories of Goldrake The Playboy.  Since 1972, when Barbieri left the partnership and founded the Edifumetto, Montanari has been working for at least a decade, creating various pocket-sized characters, including Lando.  In the same year he joined another comic book artist, Ernesto Grassani, with whom he started a prolific four-panel production that still continues today.

Since 1974, he collaborated with Grassani on Lancio Story, Intrepido and Corrier Boy.  Since 1979, Grassani started working with Sergio Bonelli Editore, starting with Piccolo Ranger, then Full, and for twenty years with Dylan Dog.  The first of many Dylan Dog's songs, designed by Montanari & Grassani, is the third Night of the Full Moon (1986), but they together produced in 1996 the Almanac of Fear and all Maxi Dylan Dogs since 1998 During his long career, there is also collaboration with the weekly Corriere dei Piccoli and The Journal.