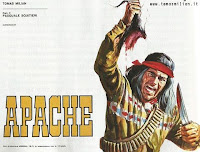 Mike Ferguson states the film was mentioned numerous time in Variety back in 1970 and they even ran a full page advertisement. Pasquale Squiteri was going to film it in the United States which was all the rage then. He had to scale it back and eventually made “Vengeance is a Plate Eaten Cold” (aka “Vengeance Trail”) for a different producer and distributor. It was changed so much it really was nothing like the original project.