The Desire to be Winnetou 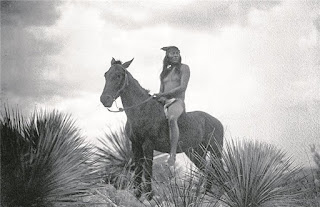 The Apache Indians were no peaceful-brothers, as the romantic Karl-May hero wanted to make us believe. Historical testimonies show images of a martial, sometimes also cruel tribe.

More than a hundred years ago, Franz Kafka published several small texts, which he carefully selected, including the one-sentence "a desire to become an Indian".

This title inspired much later (1994) Peter Henisch an entire book. Kafka's text is generally very short, a little puzzling, longing through the used conjunctival and spreading a touch of existentialism: "If you were an Indian on a running horse, crookedly short in the air On the trembling ground until the spurs were left, for there were no spurs until the reins were thrown away, for there were no reins, and scarcely saw the land before them as a smoothly mowed heath, already without a horse's neck and horse's head."

In the bestseller "Winnetou I", which first appeared in 1892, there are several places that can inspire a similar image of an Indian. The Winnetou text, which Kafka has certainly read, is one of the literary of the more sophisticated Kolportage author, trivial writer and "Reiseromanciers". May, who traveled to the USA only once and many years after the appearance of his tetralogy (Winnetou I-III, Winnetou's heir), had taken his information on the equipment, customs, and customs of the Mescalero Apache himself from contemporary books.

In the course of a number of incarcerations of prisoners of property, presumption of imprisonment, and coercion in the 1860s, he had taken care of the library of the detention center, where he was hardly likely to be in contact with scientifically founded literature. But also the authentic descriptions of encounters with the Apaches, such as those of John Ross Browne, which were available at that time, obviously he did not. He would not have had to learn English to read this, because a German translation of the book "Abenteuer im Apachenland" appeared in 1871 in Jena at the publishing house Costenoble.

After 1874 Gera-Ernstthal and his later residence at Radebeul near Dresden were removed. Even older was the 1851 translated and published representation of George Catlins, "The Indians-Noramikas - written the during an eight-year stay amongst the wildest of their tribes experienced adventure fates". Catlin's book was rare, but Brown's rather sober and depicted images of the Apache land, motivated by the spirit of mining and exploration experts, were certainly available in bookshops and libraries in Saxony.

It is delightful to compare Brownes and May's portrayals, which at the same time concern the same Schauplatz. The Irish-born author, whose whistle book, 1844 Herman Melville, who lived in the same place as the later 1876 Jack London in Oakland, California, only decades later also influenced Mark Twain, and several trips to Arizona, Sonora and Texas.

His original work, which was certainly recommended by her lordship to the librarian of Oakland, which Jack London greatly admired, also contains a report of the Mowry massacre. Not far from the Mexican frontier, two miners had been murdered by Apaches, and a little later a doctor traveling alone escaped the same fate. Brown's travel group, which also belonged to an Indian commissioner, found a few weeks after the assassination of the two young white mine workers, bloody arrows and evidence on the battlefield of the attack.

Karl May might have been aware of this creepy place: it was not a gorge.
Posted by Tom B. at 6:34 AM