Who Are Those Guys? ~ Rafael Luis Calvo 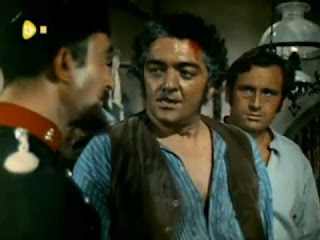 Born in Madrid, Spain on December 30, 1911, Rafel Luis Calvo Muñoz was the nephew of actor Ricardo Calvo (Rafael Calvo Ruiz de Morales) [1911-1966] and the older brother of writer, actor Eduardo Calvo (Eduardo Calvo Muñoz) [1918-1992. His career began shortly after the Spanish Civil War and he would go on to appear in over four dozen films, TV appearances but mainly as a Spanish voice dubber from 1944-1988. With his rich deep voice he was often called upon to provide the Spanish voice of such Hollywood stars as tars like Stewart Granger, Clark Gable (among others in What the wind took), John Wayne, Gary Cooper, Gregory Peck and Curd Jürgens, while also doubling himself in the films he played in co-production.

On September 28, 1964, while traveling on the Madrid-Barcelona highway, Calvo was involved in a terrible accident when his vehicle hit a bus that was coming in the opposite direction in the curve of entry to Calatayud. After suffering serious injuries he had to abandon his career as an actor and at the end of 1964 decided to dedicate himself solely and exclusively to the dubbing of films, in which he had already acquired a great reputation from years before. One of his last works was the dubbing of the Master Jonc in the TV series of the TV ‘Los aurones’ (1987-88). Shortly before, he had been awarded an honorary prize for Lifetime Achievement which he received from the Golden Lecterns.