Casa de Campo is the largest park in the city of Madrid and contains a series of repilicated buildings of different architectural styles of different Spanish cities that made up the former ‘Feria del Campo’. One of the buildings had a large stone wall and annex with a white patio with arches in Andalusian style, although it was the House of Toledo. It has been used in several different horror films and westerns including “Fistful of Dollars” (1964) “7 Guns for the MacGregors” (1965), “The Fury of Johnny Kid” (1967), “Navajo Joe” (1967). The building has been renovated and is now used as a restaurant. 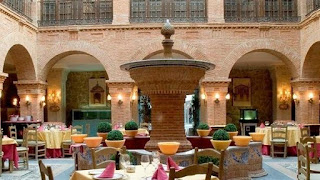