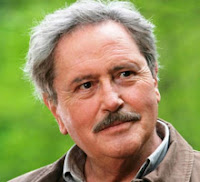 French film and TV actor Victor Lanoux died in Royan, Charente-Maritime, France on May 4th. He was 80. Lanoux had been in poor health since suffering a stroke in 2007. After his assiduous debut on stage in the 1960s, he had revealed himself to the greatest number in the cinema, alongside Jean Gabin in L'Affaire Dominici by Claude Bernard-Aubert (1973), Adieu poulet (1975) by Pierre Granier-Deferre, Cousin, cousin (1975) by Jean-Charles Tacchella, two films that had earned him a César nomination, and Yves Robert's An Elephant (1976).  From 1998 to 2014, his role as a second-hand dealer, appreciated by millions of viewers, had made him an inescapable face of the small screen. He appeared as Charles de Vigois in the Euro-western TV film Louisiana in 1984.
Posted by Tom B. at 8:02 AM