Who Are Those Guys? ~ José ‘Pepe’ Calvo 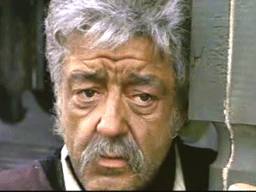 José Calvo Salgado was born in Madrid, Spain on March 3, 1916. He entered the film industry in 1952 and was prolific as an actor throughout the rest of the 1950s and 1960s. He made many appearances in crime dramas, often with a historical theme and appeared in a high number of western films.

In 1964 he starred as the innkeeper Silvanito in Sergio Leone's Spaghetti Western production “A Fistful of Dollars” as one of Clint Eastwood's few "amigos" in the town of San Miguel. He later appeared in westerns such as “Day of Anger” (1967) opposite Lee Van Cleef, “Dead Men Ride” (1971) and Dust in the Sun (1973). Pepe appeared in over 150 films and with such directors as Juan Antonio Bardem, Luis Buñuel and Sergio Leone.

However, after the Spaghetti western era in  the late 1960s, he returned to appearing in primarily Spanish films and in contrast to the roles which dominated much of his career did appear in several Spanish comedy films often with slapstick humor as that genre grew popular in Latin cinema during this period.