Who Are Those Guys? ~ Rory Calhoun 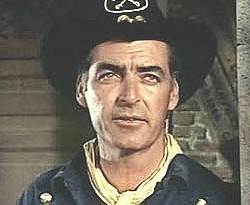 Rory Calhoun was born Francis Timothy McCown in Los Angeles, California on August 8, 1922 the son of a professional gambler. He spent his early years in Santa Cruz, California and was only nine months old when his father died. His mother remarried, and he occasionally went by Frank Durgin, using the last name of his stepfather. His teenage years were his roughest, he stole a revolver, for which he was sent to the California Youth Authority's Preston School of Industry reformatory at Ione, California. He escaped and after robbing several jewelry stores, he stole a car and drove it across the state line. This made it a federal offense, and when he was recaptured, he was sentenced to three years in prison. He served his sentence at the United States Medical Center for Federal Prisoners in Springfield, Missouri. Later he was transferred to San Quentin prison on other charges. He remained there until he was paroled shortly before his twenty-first birthday. In 1943, while riding horseback in the Hollywood Hills, he met actor Alan Ladd, whose wife, Sue Carol was an agent. She landed Rory a one-line role in a Laurel and Hardy comedy, “The Bullfighters”, where he was credited under the name Frank McCown. Shortly afterwards, the Ladds hosted a party attended by David O. Selznick employee Henry Willson, an agent known for his assortment of young, handsome and marginally talented actors to whom he gave new, unusual names. Willson signed McCown to a contract and initially christened him "Troy Donahue"; it was soon changed to "Rory Calhoun". Willson carefully groomed his new client and taught him the social manners he had never learned in prison. After playing small parts for a while, he graduated to starring in western films, including “River of No Return” in 1954 with Marilyn Monroe and Robert Mitchum. His better known pictures include “How to Marry a Millionaire” in 1953 with Lauren Bacall, Marilyn Monroe and Betty Grable, and “With a Song in My Heart” in 1952 with Susan Hayward. From 1959 to 1960 he starred in the CBS television series ‘The Texan’ Rory appeared in only one Euro-western “Finger on the Trigger” the original role was to be for Victor Mature but after showing up in Rome he disappeared on a two week drunk. Unable to locate Mature producer Sidney Pink asked Rory if he would step in and fill the role. He consented and did an admirable job with little preparation for the part. More than two decades later he returned to CBS for five years as Judge Judson Tyler on the daytime serial ‘Capitol’. His final appearance was as Ernest Tucker in “Pure Country” in 1992. Rory has two stars on Hollywood's Walk of Fame, One for motion pictures, and one for television. Rory was married twice and produced with his two wives four daughters. His first wife was Lita Baron, they were married from 1948 to 1970, his second wife was Sue Rhodes, they were married from 1971 until his death. He also had another daughter with actress Vitina Marcus while he was married to his first wife Lita. Rory died in Burbank, California at the age of 76 from complications resulting from emphysema and diabetes.