Who Are Those Guys ~ Alfio Caltabiano 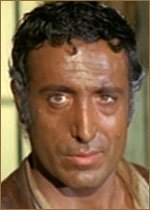 Alfio Caltabiano was born in Pistoia, Tuscany, Italy on July 17, 1932. Also known as Al Northon AlfRandal and Alf Thunder to Euro-western fans, Caltabino was a director, screenwriter and actor in over two dozen films including “Comandamenti per un gangster” (1968) and  “Tutti figli di Mammasantissima” (1973). He was also a master of arms and a choreographer. Alfio started his career in cinema as a stuntman and exploited his physique. Among his early films were “Ben Hur”, in which he portrayed Jesus Christ, where he was visible only from behind, carrying the heavy wooden cross on the Via Crucis scene. He appeared as an actor in about twenty films, especially spaghetti-westerns, while as a director he started in 1967 with the movie “Ballata per un pistolero” (Ballad of a Gunman) (1967). His film career ended in 1977, after shooting finished on “California”.